The Spirits of the Season, Then and Now 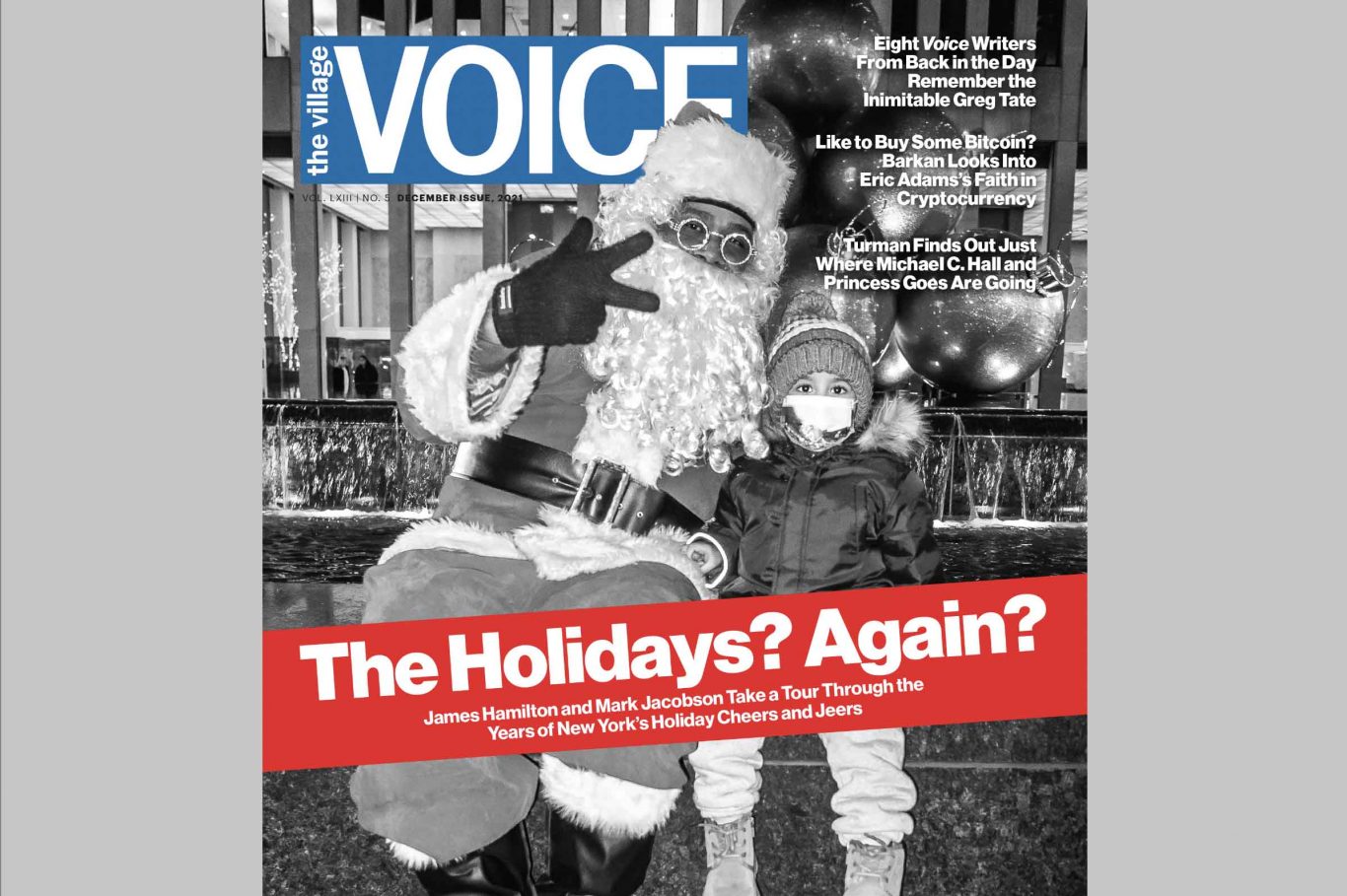 Truth be told, I’ve never been one for the so-called “Holiday Season,” my views being pretty much in line with those of Sergeant Raymond Shaw, the brainwashed assassin played by Laurence Harvey in the original Manchurian Candidate. “Twelve days of Christmas,” Shaw/Harvey says with weary patrician disdain. “Isn’t one loathsome enough?” Be it the totemization of a fat Aryan paladin of capital who keeps tabs on who’s been naughty and who’s been nice and the NSA-like lists he checks twice, the annual exhumation of Andy Williams’s “It’s the Most Wonderful Time of Year” to join the approach of in addition another panhandler, the hellacious traffic, or the crap weather—the shortest days of the year are typically my longest. 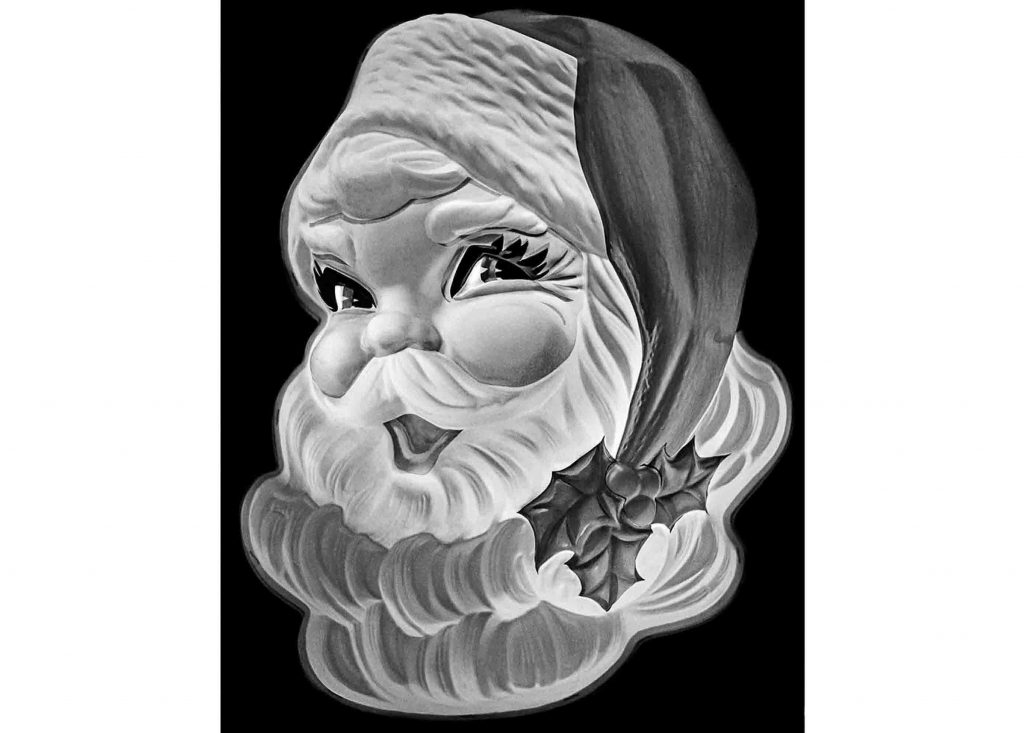 It isn’t that I am a reflexive Scrooge or refuse to participate in a consensus of joy. I can picture myself as the Dad of Big City fantasy: bounding out of a yellow cab in front of a Park method apartment house to hand the smiling doorman an armful of brightly wrapped presents from FAO Schwartz and a little something special for the wife from some guy on 47th Street, because really, who are you if you don’t have a diamond guy on 47th Street? I want to be merry, ho, ho, ho. I want to be gay, hey, hey, hey. But when I walk into the lobby of an anonymous apartment house smack in the middle of The Season, it just makes me lonely and blue. 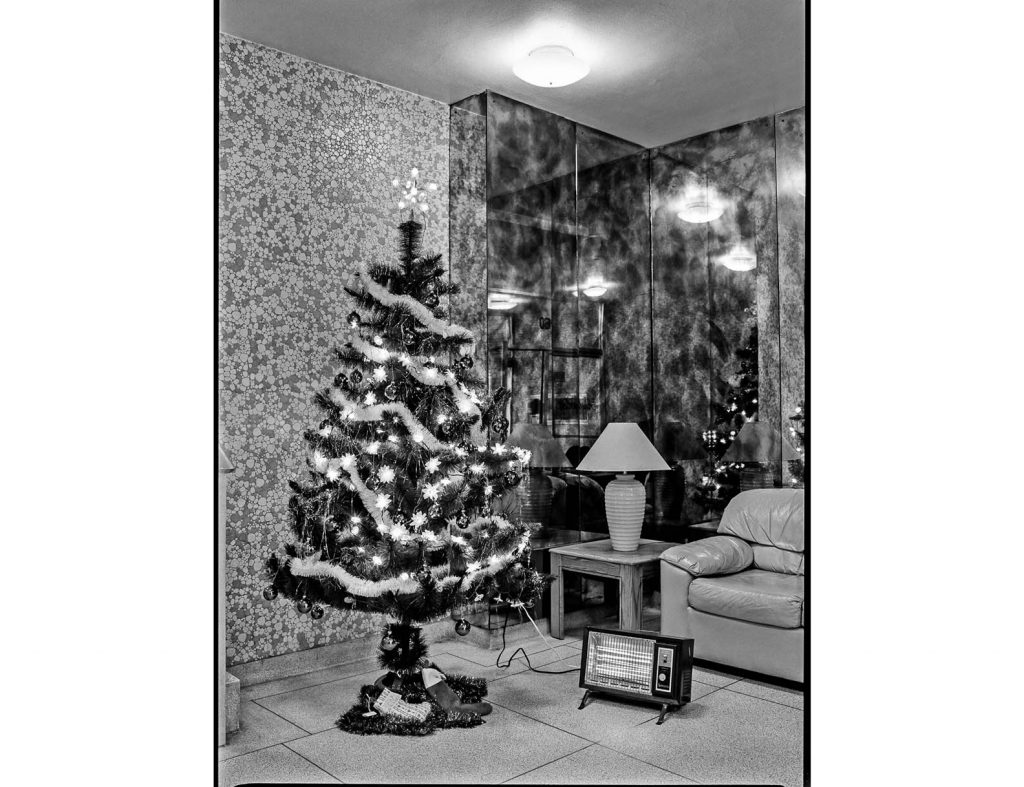 Maybe this feeling has something to do with how the little cruelties of “normal” life—a slight at work, the rise of the price of gas, the seemingly haphazard exercise of strength by local authorities—take on an additional edge during the Holidays. “Look at this!,” you can hear Fox News say during their War Against Xmas coverage, reporting on the ticketing of this poor soul whose only crime was selling blow-up Santas. “Right on Christmas Day.” 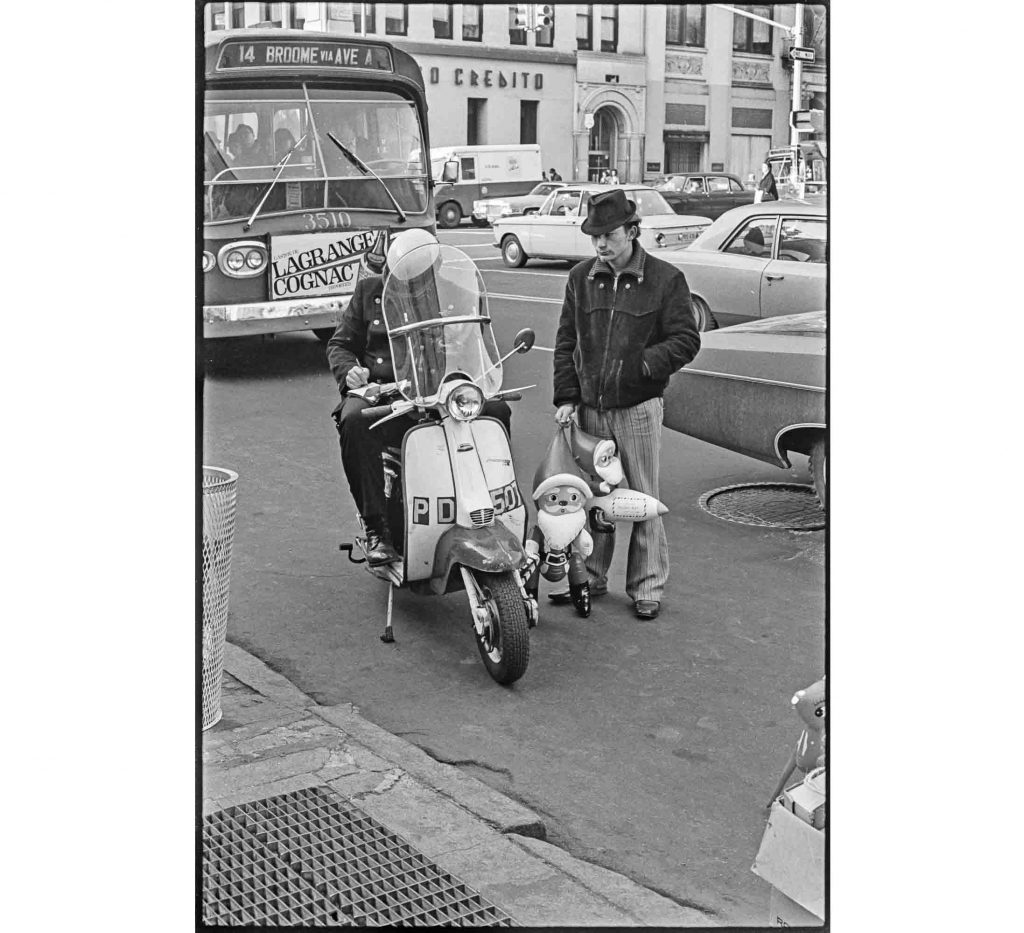 Or maybe it is the hustle of the mass culture. When confronted by the relentless, seasonal, fake entreaty to universal brotherhood, you recognize your inner Harry Lime and let in you wouldn’t know, or care, if one of those little dots down there suddenly stopped moving. 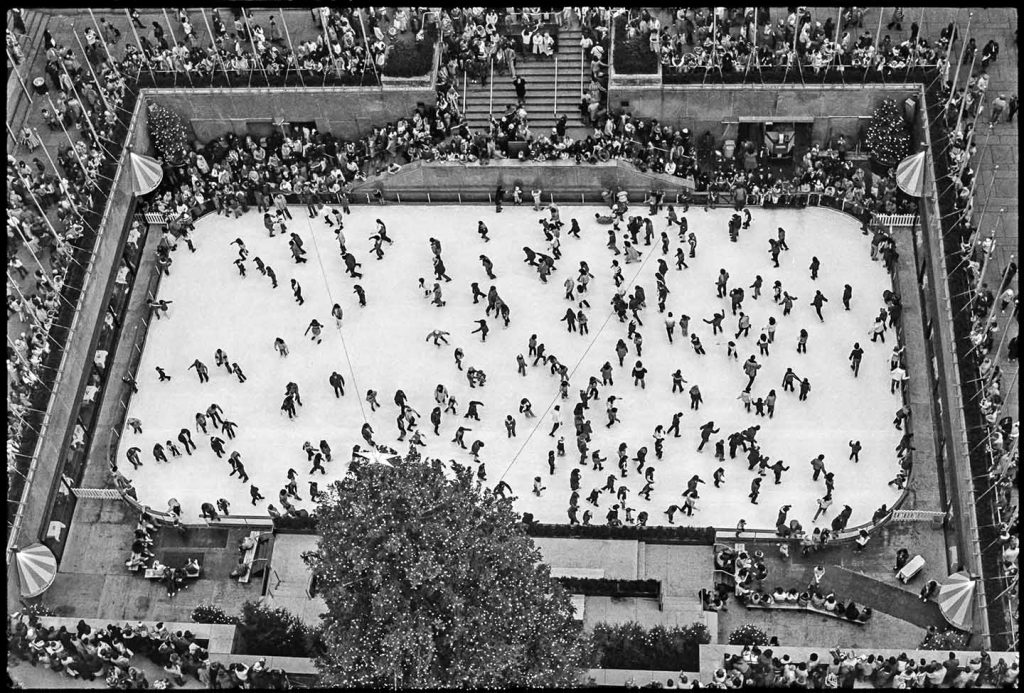 This doesn’t average that the hometown would be better off without the Holiday Season. As explained by Romanian philosopher Mircea Eliade, there are two kinds of time, the holy and the profane. Each society must invent its particular version of holy time and place, the recurring “axis mundi” of its existence. You’ve got to have the holy to offset the numbing, endless procession of the profane. Once established, the holy creates a continuum of its own, an archetypal portal to a unperimetered scenery where the traditional boundaries of past, present, and future fade away. That said, the local suspects that Eliade’s magic doorway to the holy plays better on a smaller, more specific mnemonic canvas, like, say, a single blank space in a subway stop frequented by denizens of a vanished downtown subculture. 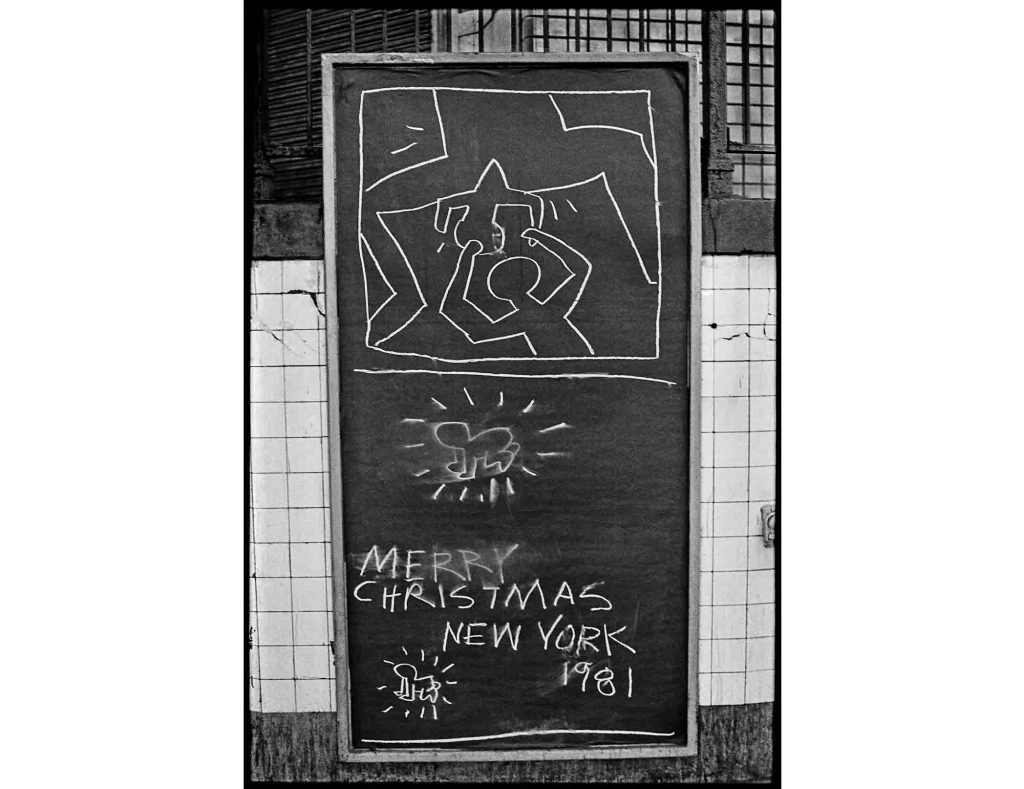 If the Holidays are supposed to be about the preservation of the past by tradition and ritual, nothing in the Big City is immune to change. Every day things disappear. A few nights ago, as we drove down what New Yorkers nevertheless call the West Side Highway, despite Giuliani renaming it Joe DiMaggio Highway in 1999, we noticed that the cursive “Seasons Greetings” on the front of the USS Intrepid that James had photographed a few years before was no longer there. That is just in addition. After all, in 1944, the newly constructed Intrepid fought the Japanese at Leyte Gulf, the largest battle in recorded naval history. Hundreds of boats were involved, dozens of which were sunk. More than 20,000 men and women lost their lives. Two decades after that, the Intrepid played its part in the carpet-bombing of Vietnam, killing who knows how many thousands more. in spite of of what one believes about the price Americans must pay to continue their freedom, the USS Intrepid, with 100 planes of prey perched on its 870-foot-long deck, including detachments of VA-36 Roadrunners and VA-60 Waldos, not to mention a complete supplement of 127 mm anti-aircraft cannons, could hardly be described as an emissary of peace on earth, goodwill to men. 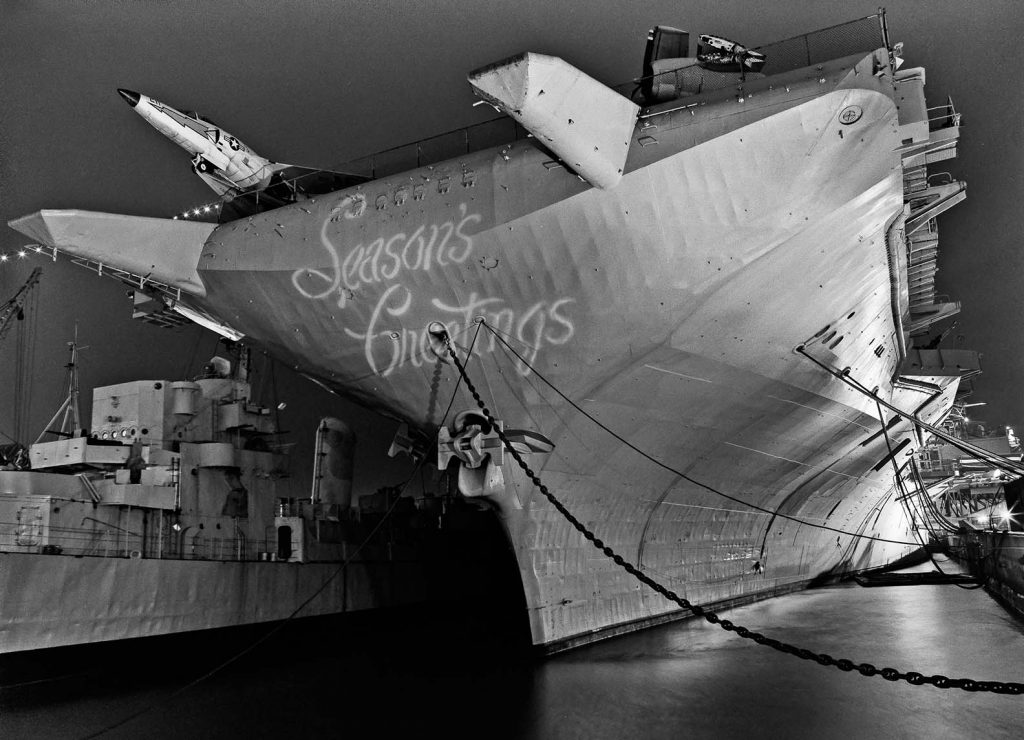 In times of pandemic, already the Biblical is not fixed. As proven in this Hamilton photo from 1988, there have always been three camels backstage waiting to make their turn up during the Radio City Music Hall Christmas Spectacle. in addition, as I noticed while attending the show with my granddaughter last week, already that had changed. About to turn 4 years old, it was Alice’s first show, which I found appalling. Ordinarily, she would have been to plenty of shows and movies by now. Instead, she’s spent a complete third of her time on the planet cooped up in a one-bedroom apartment in Ridgewood, Queens, with her telecommuting parents. Radio City wouldn’t make up for all that, but the grandeur of the surroundings and cumulative number of children’s smiles over the past 90 years has done much to mitigate the demoralizing factoid that the hall, built by the robber baron Rockefellers, is now in the stubby hands of James Dolan, unloved owner of the New York Knicks. For Alice’s visit, we already got to meet a Rockette, the fabulous Soultana. This duly noted, it was quite a shock when the Three Wise Men arrived onstage on their camels. There were only two of them! Two Wise Men on two camels, as far as I counted. Was one at the vet, or simply taking the night off? Was it an oblique commentary that two camel-riding Wise Men were sufficient in this anti-intellectual era?  A “supply chain” issue? Did the management simply assume no one would notice? Luckily, none of this concerned Alice, which was all that mattered. 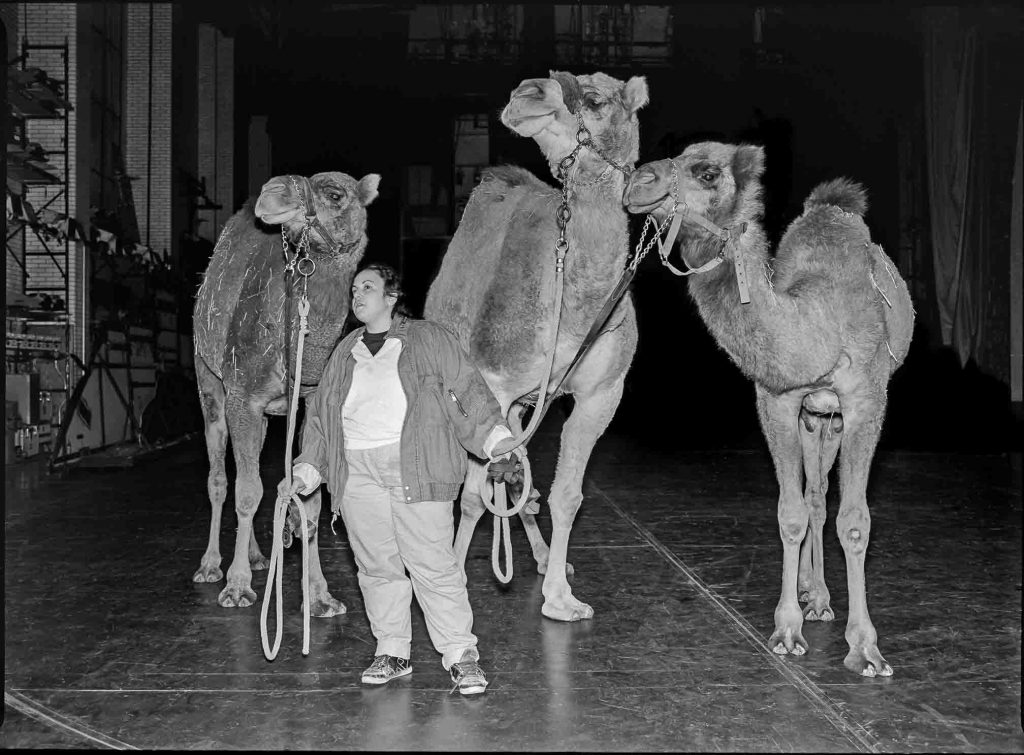 It was the first night of Chanukah, so the plan was to excursion out to 770 Eastern Parkway, Temple of the late Rebbe Schneerson, the proclaimed messiah of the Lubavitch people of Crown Heights. Yahweh saved us the trip, as the rebbe, or his likeness, came to us. by the eerie post-pandemic quiet of Midtown came the caravan of horn-honking “Mitzvah Tanks,” each bearing a giant photo of the Brooklyn savior. From every window of the converted RVs poked the heads of young revelers passing boxes containing menorahs to each other and shouting their now familiar question to motorists and passersby: “You Jewish?” For Jews like me, who grew up in the not-so-promised land of Queens dutifully attending Hebrew school and lighting eight subsequent candles to place in the window, this is a difficult question. You can tell them that you don’t see how your religious background is any of their business. You can tell them, “Yeah, but not like you,” which is accurate, since getting Bar Mitzvahed and duking it out in schoolyards with classmates who mockingly sneezed “ah-ah-ah-Jew” when they saw you coming will never be enough. It is a problem of identity, like so many others in the Big City. Go to Colorado, tell people you’re a New York Jew, part of a century-plus saga of immigrant radiance, and they don’t believe you because you’re not wearing a black hat. On this night, however, my resentment all but vanished. The palpable joy, the delirious happiness pouring from the Mitzvah Tanks made it impossible not to give in. There’s something that gets me about almost any ecstatic religious experience, and the Chabadniks are nothing if not ecstatic. For a moment it didn’t matter that many of the celebrants thought the earth was produced six thousand years ago, and wouldn’t get vaccinated unless the rebbe told them to. They were waking up the town, bringing the party. So I answered, “Yeah, I’m Jewish,” which was followed by a cheer and a shower of boxed-up menorahs flying out of the Mitzvah Tank windows. Hamilton didn’t get one, but then again, not being one of the Chosen People, he didn’t expect to. 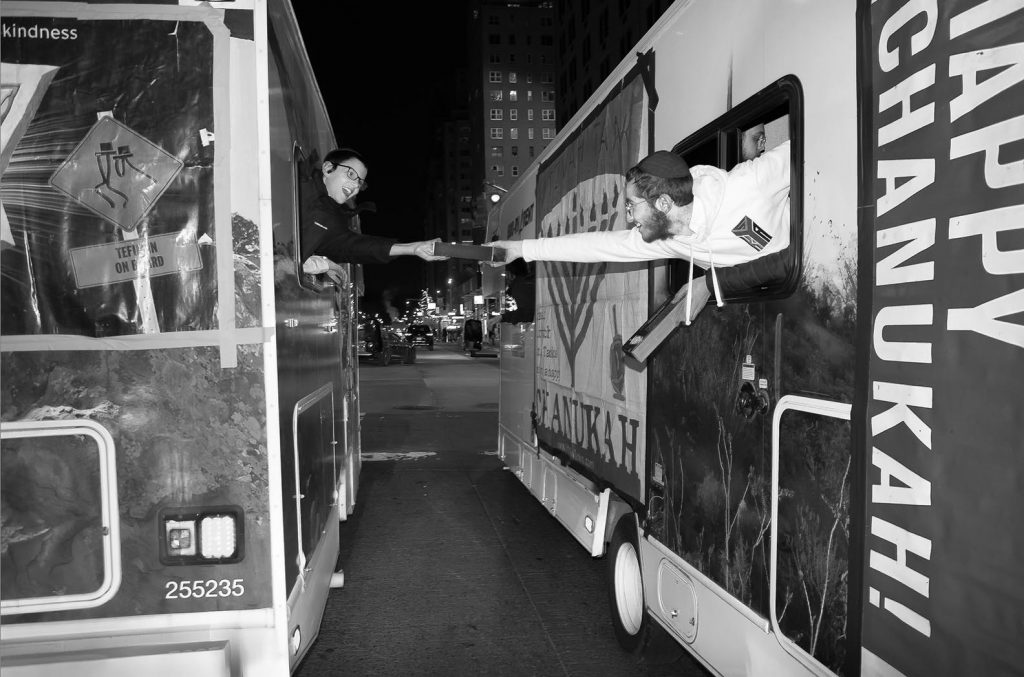 Passing Souvenir Menorahs From One Mitzvah Tank to the Other, 2021 James Hamilton

Then there’s Andrew, a Black Santa. Jolly as all get-out, surrounded by the Halal carts and hawkers of knock-off Gucci bags on 49th Street, this was Andrew’s first stint as a sidewalk Santa. Being a self-described “Times Square person,” who hung around with the break-dance troupes that would attract tourists six rows thorough on hot summer nights prior to the 2020 lockdown (in addition to putting in time as Big Bird and Grover), Andrew thought he’d give the gig a go. It was something of a revelation. “I put on this costume and I can just feel all the negativity flow out of me,” Andrew says, peeking over starburst-frame glasses. Being Santa is “the real cure for depression, my own and everyone else’s, just talking to the kids. Grown-ups too, everyone. They love me and I love them.” He says he already gets to bring joy to his old buds from the break-dance days, Cowboy and Ray the bucket drummer, showing off the airline-size bottles of Fireball Cinnamon Whisky, which he keeps as presents for the crew. 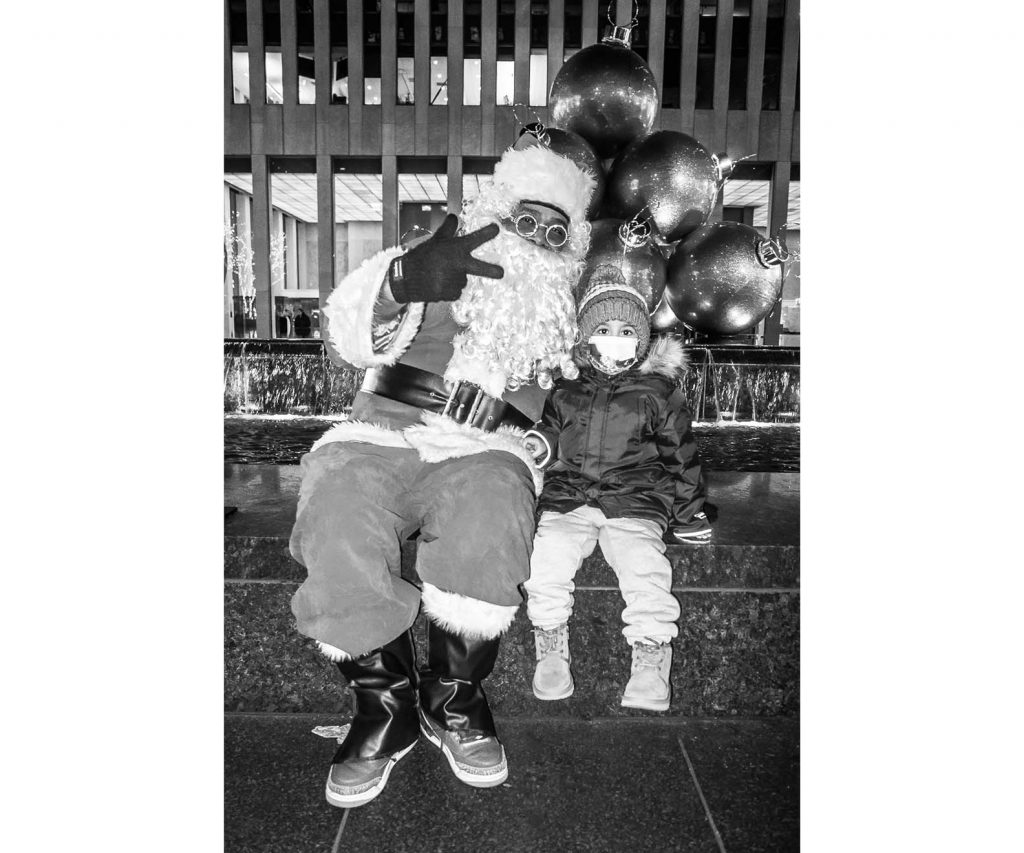 “Think we got to get that,” I said to James as we passed Macy’s. New York is known for extravagant Holiday store windows, but this was different, just a stark three-story cluster of white lights spelling out “Believe” in script affixed to the unadorned 34th Street facade of the town’s most famous emporium. Believe. Compared to the LCD riot around the corner, the single information was as stark as a commandment from preacher Jonathan Edwards’ 1741 sermon “Sinners in the Hands of an Angry God.” Believe! But what was supposed to be believed during the Holiday Season of 2021, in the midst of the slow-motion apocalypse, with mutant viruses shape-shifting every other day? Was it the products displayed in the store’s ground-floor windows: Burberry, Longchamp’s, Tissot, Footlocker, Sephora? Or the fake-weed dealer in the truck across the street? Was it one narcissistic paean to the cult of self-empowerment, or were they really talking about God and faith? It was something to contemplate, a challenge of sorts, I was thinking, when Hamilton said, “It’s not much of a picture.” But then he shifted angles. He didn’t do much, just a few degrees to the right and up, but that’s Hamilton for you, a reader of the imperceptible. The adjustment put the Empire State Building, only a block away, into the shot—the glorious Empire, spire of Kong, in our hearts forever the tallest building in the world. Now, it was a picture. Because if there was anything we believed in during this Holiday Season, or ever, it was The City, the one we knew, the one that was and will be. 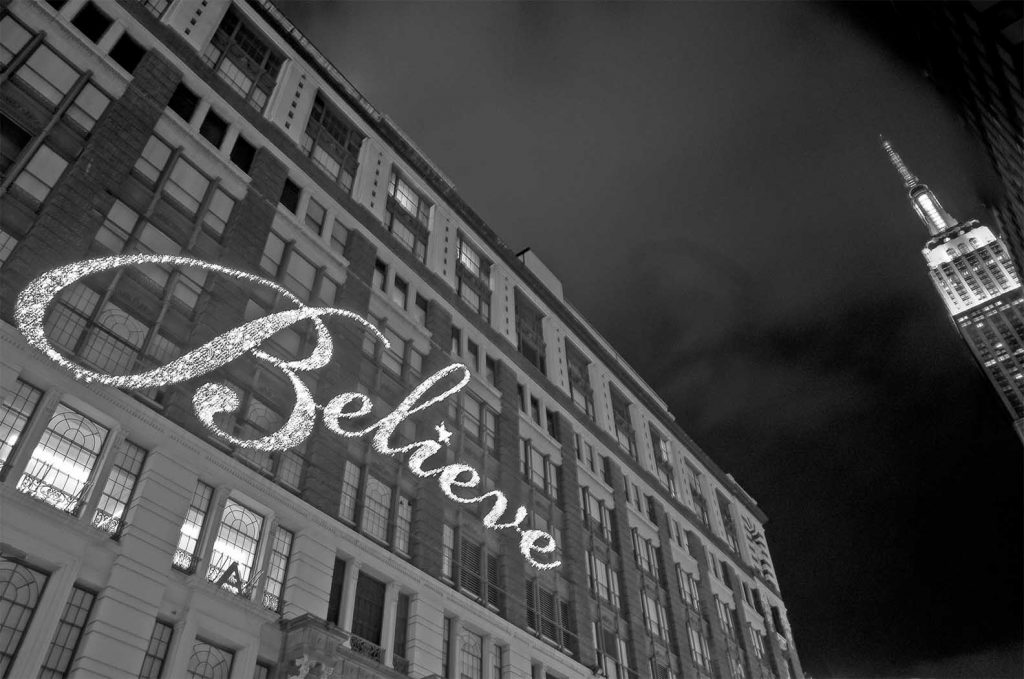